Over the last couple of months, I’ve shared some of the amazing things we did while in Hawaii before Christmas. On Kauai we explored the island by biplane and hiked the famous Napali Coast, from above and below. On Maui we snorkelled in a volcanic vent and watched the sunrise from the top of Haleakala. On Oahu we visited the Arizona Memorial and the other Pearl Harbor Historic Sights. While on the Big Island of Hawai’i, we swam with wild dolphins and manta rays, and even flew over oozing lava in a helicopter without any doors!

But right up there near the top of the list, is descending the vertigo-inducing Kalaupapa Trail. By mule.

We arrived bright and early at the Kalaupapa Rare Adventure stables, where we were paired up with our mounts for the day. Sue spent a lot of time around horses when she was younger and I was on the back of a wildebeest for much of The Great Migration. But Rich had never before ridden any type of quadruped. 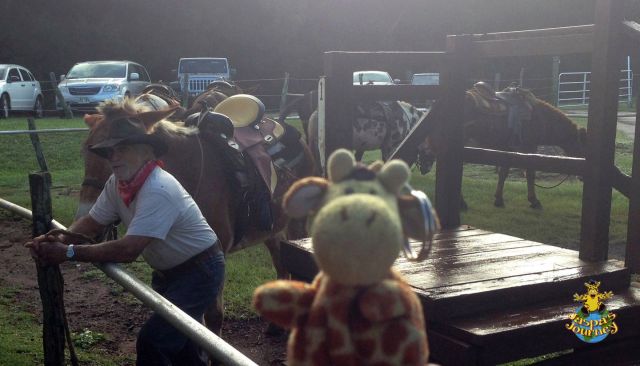 Despite being called Koa, meaning Warrior, the mule I shared with Sue was a steady and reliable companion throughout the day. Although equally lovely, Rich’s mule, Smokey, proved to be slightly more headstrong. Fortunately, Rich had a little time to get his mule-legs under him, as we left the stables and plodded through a shady wood.

Rich, Smokey and a foretaste of things to come

Then we reached to top of the cliff and the Kalaupapa Trail proper. And the real fun began. 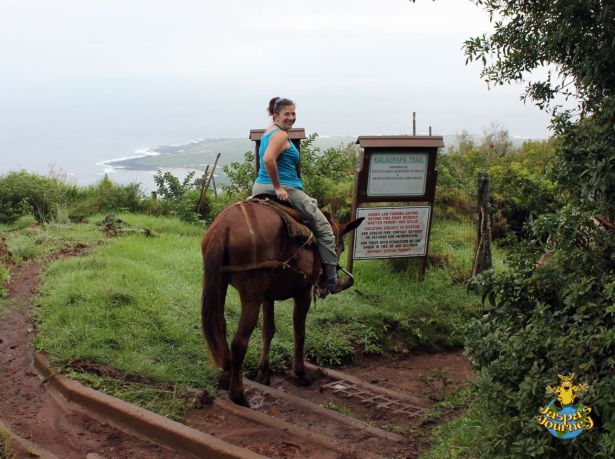 Constructed in 1887, the Kalaupapa Trail plunges over the edge of what are reputedly the highest sea cliffs in the world (depending on what you read). Approximately 3 miles long, it connects the top of the cliff, and the rest of Molokai, to the otherwise isolated Kalaupapa Peninsula and leprosy colony, 1780 feet below.

The first part of the trail hugged the side of the cliff, just below the ridgeline. This initial section angled downwards quite gently, although the precipitous drop to the left of the one-mule-wide path, ensured the adrenaline was already flowing.

Kalaupapa Peninsula and the ‘easy’ bit of the trail

Before long, the trail steepened to such a degree that it essentially became a never-ending series of rough, deep, stone steps. Unfamiliar with the lurching way Smokey was forced to stagger down these steps, Rich later confided that more than once he imagined himself pitching straight over the top of her head and off the side of the cliff. Especially when Smokey decided she wanted to be further up the chain of mules and started overtaking!

And that was before we encountered the first of the 26 dizzying switchbacks that stood between us and our destination. If the hairpins themselves weren’t bad enough, the insistence of both Smokey and Koa to place their hooves on the very lip of the path as they negotiated the turns was stomach-churning. 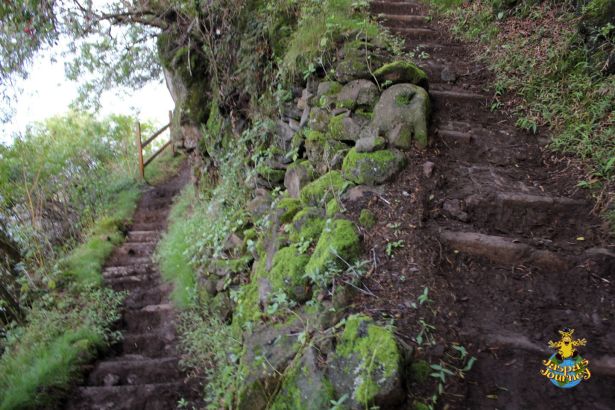 In case you missed it in the last two photos, this is what the switchbacks look like!

Yet as it turned out, all our fears were misplaced. Our mounts were as sure-footed as mountain goats. And after an hour or two of juddering down the cliff, we found ourselves safely ambling along the beach.

Temporarily swapping our mules for an old yellow school bus, we spent a pleasant couple of hours being shown around the Kalaupapa Peninsula by John from Father Damien Tours. I was amazed to learn that the last patient came to Kalaupapa as recently as 1969. 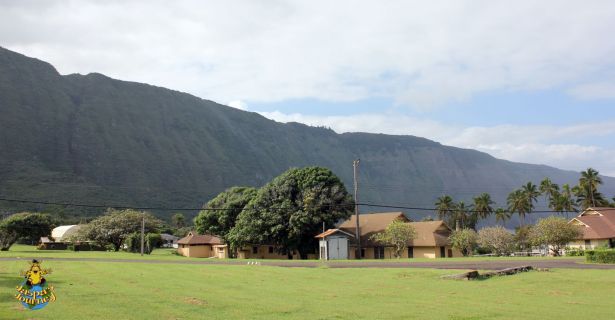 Kalaupapa settlement and the cliffs we just came down 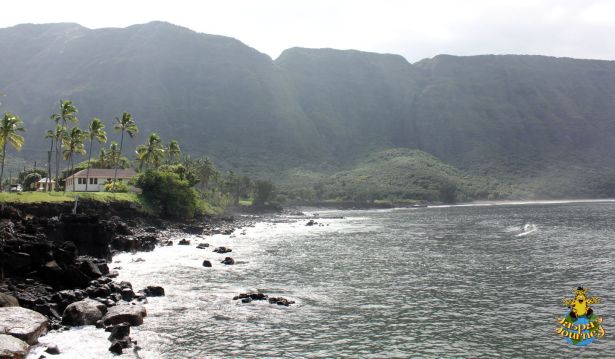 I tried to mark in our route, but could only spot 13 of the 26 switchbacks!

Kalaupapa remains a sanctuary for the handful leprosy patients (also known as Hansen’s disease) who still call it home. As a mark of respect, access to the peninsula and rules for visitors are closely regulated, and only guests of the residents are allowed to stay overnight.

Kalaupapa general store is for the residents only

From the current settlement of Kalaupapa, we crossed to the far side of the peninsula, to the site of the original leprosy colony, Kalawao. There we ate a picnic lunch overlooking where the cliffs of Molokai plunge straight into the sea.

Kalawao, on the east side of Kalaupapa Peninsula: Not a bad spot to spend eternity

After lunch, we had time for a brief stop near Kalaupapa’s airstrip to view the lighthouse, before we were delivered back into the care of Koa and Smokey.

The Kalaupapa Peninsula and its walls 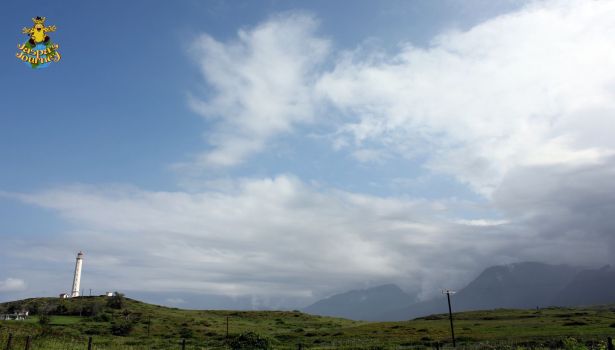 The tottering climb back up the cliff wasn’t quite as nerve-wracking as on the way down. Mainly because there were no worries of being thrown over your mule’s head. Although Smokey and Koa continued to place their feet on the very edge of the precipice, seemingly courting disaster. Or perhaps just messing with their riders’ heads.

Off we go again 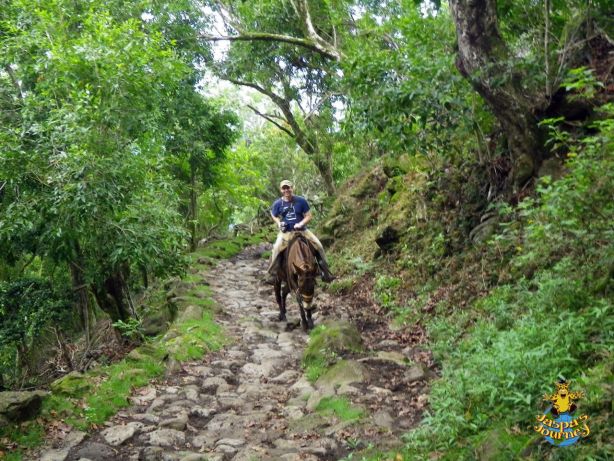 A relatively wide part of the Kalaupapa Trail

That said, we reached the stables at the top of the cliff with a mixture of relief and regret, sad to have to say goodbye to Koa, Smokey and our guides. The Kalaupapa Mule Trail really was an exceptional Journey. 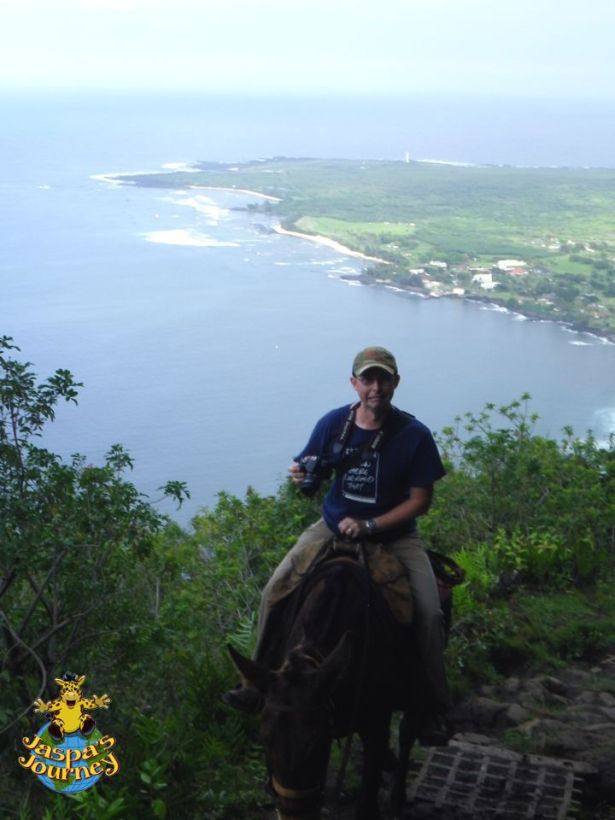 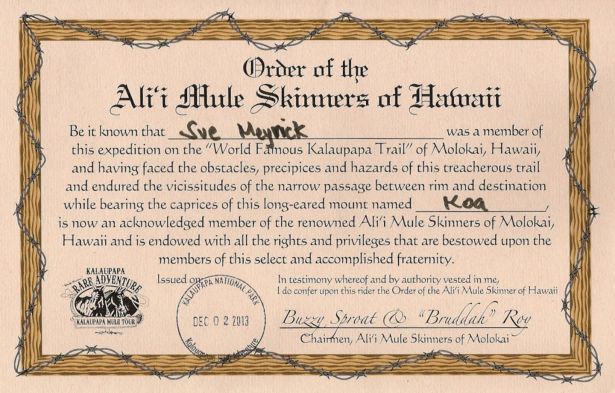