My Night in a Swedish Prison

It’s true. I did spend a night in the cells while visiting Sweden back in 2012.

I know convicts always claim to be innocent, but I really was! Honest Guv’nor!

And so was every other jailbird in the joint.

It’s off to the slammer for us! Entering Långholmen Prison

There’s been a prison on the island of Långholmen in the centre of Stockholm for two and a half centuries. Fortunately, we were only there for one night. And these days the inmates have control of their own keys!

Sue’s looking a bit shifty, if you ask me

Originally converted from the large private house of a wealthy Stockholmer, Långholmen Prison was established in 1724. The complex evolved during the next 251 years, until the last prisoner left in 1975. Over the decade that followed, the buildings fell into decay, and many were eventually demolished.

Then, in 1989, Långholmen Prison reopened its doors. But this time around, the inmates were begging to be allowed to stay! 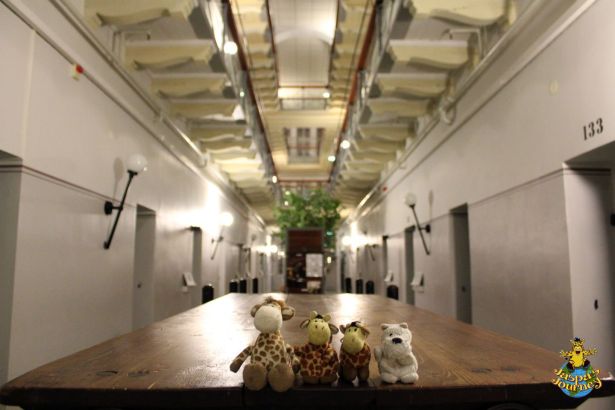 Today the Långholmen Prison complex combines a hotel, a hostel, a conference centre and a restaurant. It cleverly uses its somewhat grim history as an attraction, a way to set it apart from other similar enterprises in Stockholm. It incorporates a museum about the prison’s history, for example.

Visitors can also take part in prison-themed activities. How would you fancy becoming an inmate for the day, complete with a stripped prison uniform? You can even take part in a prison break! (I’d have loved to have done that!)

We stayed in the hostel part of the prison. Our bedroom really was one of the old cells, complete with bunk beds. But it has to be said, we had far more creature comforts than the real prisoners. For starters, every third cell has been divided in half and converted into ensuite bathrooms for the cells on either side.

After a sound night’s sleep and a breakfast most of the former inmates would have killed for, we were free to leave the confines of the prison grounds and explore Långholmen Island. Walking up to its highest point, we had some lovely views of Stockholm. (And we might even have found a geocache or two.)

I really enjoyed the novelty of our stay at Långholmen Prison. But I still can’t help wondering what the original inhabitants would have made of the whole thing.

Our cell block didn’t look too bad in the daylight!

13 Responses to My Night in a Swedish Prison