The Day I Saw A Space Shuttle Launch

At 2:20 pm on May 14th, 2010, the quiet Floridian afternoon was shattered by an adrenaline pounding roar and blast of flames. Three minutes later, all was silent again. Only a Crooked and Squiggly Line of Delicate white smoke across the sky was left to prove the awe-inspiring event wasn’t a dream.

I had just achieved what remains my biggest Bucket List accomplishment to date: witnessing the launch of a Space Shuttle with my own two eyes. This is the story of how it happened…

From the moment I first learned of the Kennedy Space Center in Florida, I knew I had to get there someday. When my wish finally came true, in March, 2008, it was doubly special… because the Space Shuttle Endeavour was sitting on the pad, ready to fly.

Me, Rich and Sue with Endeavour

Although tempted, we simply couldn’t extend our trip on that occasion. So by the time Endeavour blasted off on Mission STS 123 the following evening, Rich, Bisckits and I had to be content watching on NASA’s website from our hotel room in Chattanooga, Tennessee.

Not long afterwards, we learned that the Shuttle program was being cancelled. And with the disappointment of missing Endeavour’s launch by such a small margin still fresh in our memories, we made ourselves a promise. We vowed we’d make it back to Cape Canaveral to witness a Shuttle launch firsthand. Before it was too late.

We were collected by bus from our Orlando hotel before dawn, and ferried to the Kennedy Space Center. There we boarded a second bus, out to the NASA Causeway. Although still six miles from the launch pad, the Causeway was the closest point from which members of the public could watch a Space Shuttle launch. We arrived there almost three hours before blast off, which gave Rich and Sue plenty of opportunity to work on a wicked case of sunburn (although that’s another story).

If you look carefully, you can see Atlantis on the horizon over my left shoulder

From our viewpoint, for a second time in just over two years, I could see a Space Shuttle ready on the launch pad. On this occasion it was the Atlantis, ready for what (we all believed at that time) was to be her final flight, STS 132. The difference was that this time, if all went to plan, I’d actually get to see the launch.

We’ve all experienced how slowly time passes when waiting for something special to happen. So I expected the hours, minutes and seconds to creep past. Yet, with so many people – mostly strangers – excitedly discussing what was about to happen, the time actually flew by.

Before I knew it, there were only 20 minutes left until the scheduled launch time. Then there were just 20 seconds!

As the famous countdown clock continued relentlessly towards zero, we all crossed our fingers, hoping there’d be no last moment delays. 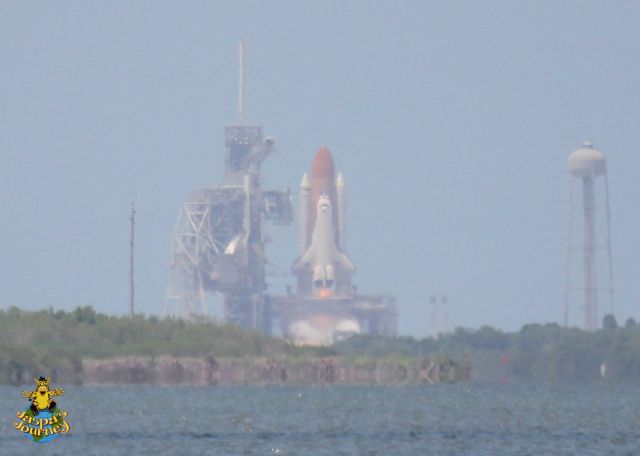 A few moments later, the booming roar of the Shuttle’s engines reached us, but by then she was already being engulfed in a cloud of smoke that glowed orange from within.

For a second or two Atlantis disappeared entirely.

Then the nose of the spacecraft slowly emerged from the billowing smoke, and she began to climb skyward. It was 2:20 pm EST. And Atlantis was on her way, right on time.

As the Shuttle slowly cleared the top of the launch gantry, the flames from her engines re-emerged from the exhaust cloud. Even from six miles away, on a bright Floridian afternoon, the glow was almost too intense to look at. The orange inferno burning nearly white.

Then someone must have released the emergency brake. Because the Shuttle’s journey skyward seemed to change from a ponderous climb out of the place of her fiery birth, into a joyful leap towards the heavens.

Atlantis rose on a pillar of flame and smoke, her engines crackling like a giant’s breakfast cereal. It was as if all her immense weight dropped away as she accelerated upwards into the clear blue sky. To infinity and beyond.

In the blink of an eye, two and half minutes had passed and Atlantis was out of sight. All that was left was that Crooked and Squiggly Line of Delicate, pure white smoke, strung out across the perfect blue sky.

We all closed our open mouths, which had dropped open during the launch. Some people immediately turned to each other, bursting into a breathless recap of what we’d seen. Others continued to stare into the sky, silent and awestruck.

My brother, Bisckits, had a single tear rolling down his face, and he wasn’t alone. We were all aware we’d just witnessed something close to miraculous. After all, there were people on that thing. People who were sitting down here on Earth with us just a few minutes ago, and were now on the edge of space.

Over four years later, I still feel the emotions welling up just thinking about that day. It was an amazing experience. Unique. One I’ll never forget. A dream come true.

With the current state of the American spaceflight program, who knows when I’ll get the chance to see something like that again?

But Atlantis herself actual got to fly one more time. An extra mission (STS 135) to round off the Shuttle program and construction of the International Space Station in July, 2011. For those who are interested, Rich wrote a guest blog, End of an Era, here on Jaspa’s Journal as together we watched Atlantis, the final Space Shuttle, land for the very last time.

This post was inspired by the themes Crooked and Squiggly Lines (from Cee of Cee’s Photography) and Delicate (from Sue of A Word in Your Ear). It’s based on an article I originally wrote as a featured blogger on Bucket List Publication in 2013.

Star of my own award-winning adventure novels, Jaspa's Journey. Geocaching addict & F1 fan. Adventure Journeyer & blogger extraordinaire. Check out my website: www.jaspasjourney.com And don’t forget to download the books and see what the buzz is all about!
View all posts by Jaspa →
This entry was posted in Adventure, History, Jaspa's Journey, Photography, Travel and tagged A Word A Week Challenge, A Word In Your Ear, Cape Canaveral, Cee’s Fun Foto Challenge, Kennedy Space Center, Space Shuttle Atlantis, Space Shuttle Endeavour, Space Shuttle Launch. Bookmark the permalink.

8 Responses to The Day I Saw A Space Shuttle Launch