The Berlin Wall was once one of the world’s foremost representations of oppression and segregation. From the moment construction began in 1961, it embodied the division of Germany, Europe and the world, literally and symbolically.

The final version of the Wall, with which we are all familiar, was completed in 1980, encircling West Berlin in a 12-foot-high concrete ring. It stood within a no-man’s-land, roughly 100 yards wide, cheerfully known as the Death Strip. 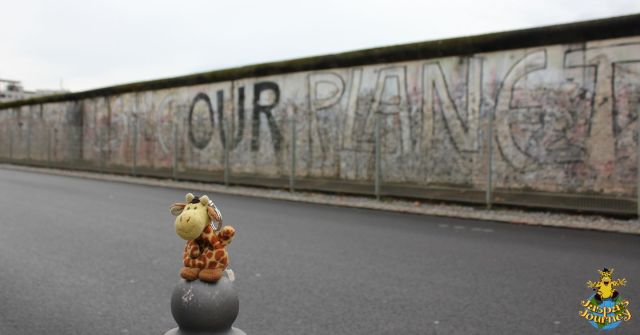 One point along the Berlin Wall’s 87 miles stood out as a particular icon of the struggle between East and West: Checkpoint Charlie, the most famous crossing point between the two halves of the city.

Yet in November 1989, history did an about-face, and literally overnight the Berlin Wall and Checkpoint Charlie became symbols of reconciliation and freedom.

As I’ve mentioned in some of my previous posts, I actually lived in Germany for a year, between 2002 and 2003. Bizarrely, however, I never made it to Berlin, despite living less than 180 miles away, in the former Eastern part of the country. (I can’t imaging making the same mistake nowadays!) Thankfully, during Christmastime 2011, I corrected my oversight.

Berlin is a wonderful city and I really enjoyed my time there. As usual, we raced around, cramming in as many of the sights as possible. Yet one of my strongest memories of Germany’s capital is of the wonderful Christmas Tree at Checkpoint Charlie. Each of its cheerful, twinkling lights was like a tiny beacon of hope and unity, on a spot once synonymous with partition and mistrust. 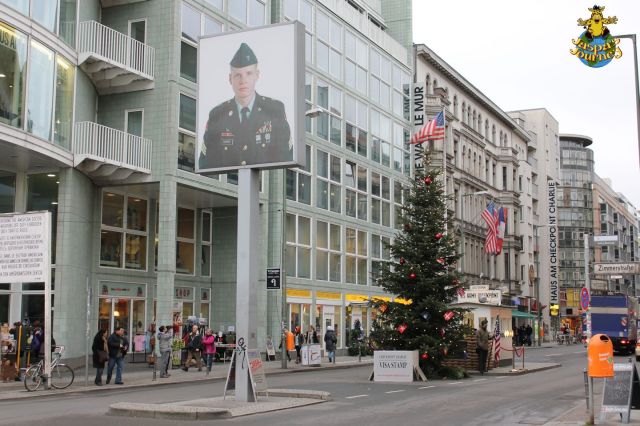 Checkpoint Charlie: where there was once a fence is now a Christmas Tree 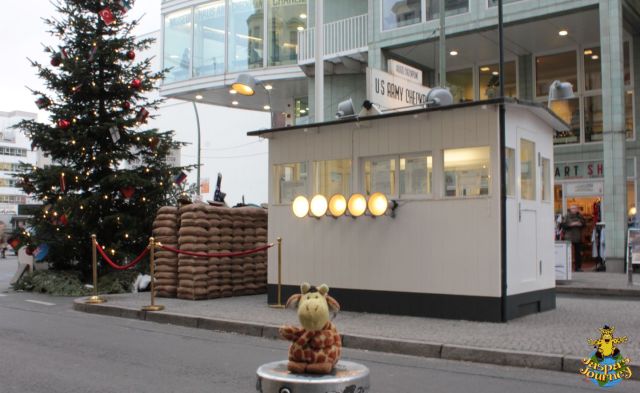 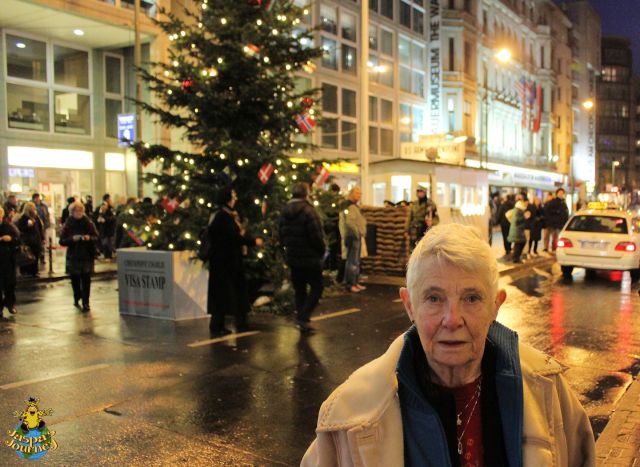 My friend Penny (who lived through World War II and all that followed) visits Checkpoint Charlie for the first time (New Year’s Day, 2012)

This post was inspired by the themes Freedom from Ailsa (of Where’s My Backpack?) and Twinkle from Jen (of The Daily Post).

Star of my own award-winning adventure novels, Jaspa's Journey. Geocaching addict & F1 fan. Adventure Journeyer & blogger extraordinaire. Check out my website: www.jaspasjourney.com And don’t forget to download the books and see what the buzz is all about!
View all posts by Jaspa →
This entry was posted in Europe, History, Jaspa's Journey, Photography, The World, Travel and tagged Berlin, Berlin Wall, Checkpoint Charlie, Christmas, Travel Theme: Freedom, Weekly Photo Challenge: Twinkle. Bookmark the permalink.