Colombian Mangroves In A Dugout Canoe

I’ve just got back from an amazing trip to South America. Thanks to a wonderful collection of local guides, all our plans went without a hitch (with the exception of Rich’s camera getting stolen just five days in, but we won’t dwell on that). Yet sometimes it’s the unplanned things that really make a day. So it was for us in Cartagena de Indias, Colombia.

When we contacted Martin of Cartagena Tour Guide, we naturally asked to see Cartagena’s historic old town, a UNESCO World Heritage Site, and the colossal fortress of Castillo de San Felipe de Barajas (blogs to follow). But a bit of local knowledge goes a long way, and Martin suggested we start our day in a way we’d never have considered on our own: a ride through a mangrove swamp in a traditional dugout canoe.

To the east of Cartagena is a lagoon and mangrove swamp called Ciénaga de la Virgen. It’s connected to the Caribbean Sea by a narrow opening named La Boquilla. The area around La Boquilla is what’s known as a Palanque, a settlement first founded by slaves who escaped from Cartagena during colonial times.

The road to La Boquilla was out, so we had to approach along the beach. Once there, our guide for the day, José, introduced us to Elias, our ‘captain’ for the morning.

View back along the beach towards Cartagena from La Boquilla

Our brightly-painted canoe really was carved from a single trunk, with a little bit of wood added around the rim for extra depth. Elias propelled it through the shallow waters of the lagoon using a long pole, which reminded me of punting in Cambridge, England.

Elias and our trusty vessel

We crossed a stretch of open water at La Boquilla and entered a wide waterway that lazily wound its way between banks dense with mangrove trees. 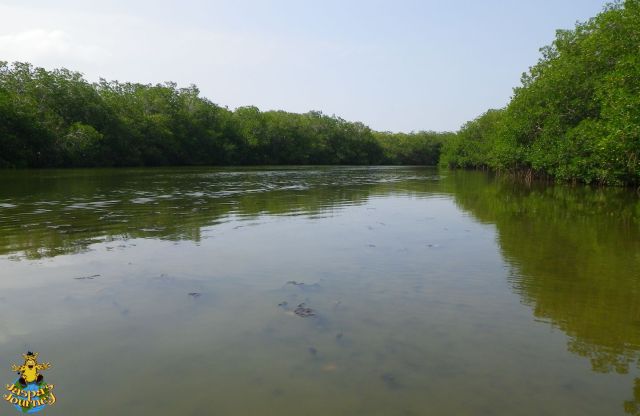 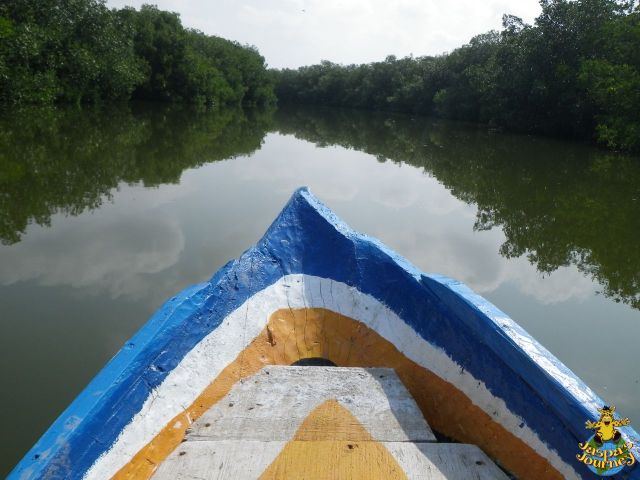 The prow of our fine ship

Before long, Elias turned the canoe straight at one of the banks. At first I though he had spotted something and was approaching to give us a closer look. Then I realised he was actually taking into a much narrower channel, hemmed in tightly by mangrove roots. 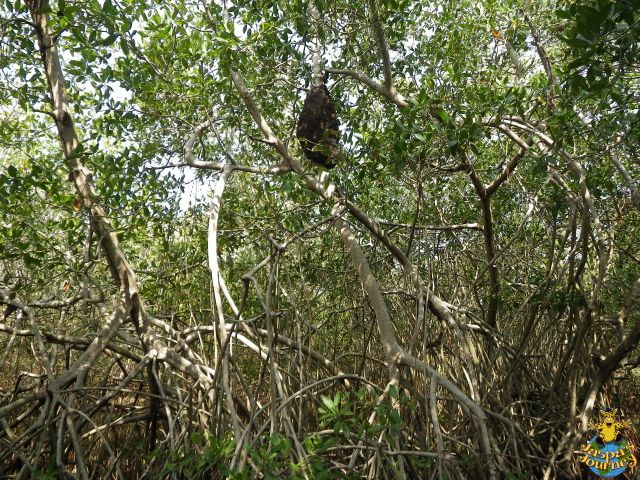 A termite nest in the trees

Thanks to Elias’s skillful handling, we barely bumped a root

After a while, the snake-like channel opened up into another part of the lagoon. There we were lucky enough to see local fishermen casting nets in the traditional manner from their own canoe.

A pair of fishermen in another dugout

Thrilled to have seen this!

Our watery journey through the mangrove trees really was a special experience. And all the more so because we hadn’t really known what to expect. A big ‘thank you’ to Martin, José and Elias!

Me with Sue, José and Elias… I think we’re being tailed!

This post was inspired by the photo themes Motion from Jen of the Daily Post) and Trees from Ailsa (of Where’s My Backpack?).

A pair of mangrove guardians

Jaspa's Journey is a series of award-winning, travel-based adventure novels for strong middle grade readers by Rich Meyrick. Join the Adventure! Read the books! Follow Jaspa’s ongoing Journeys at www.jaspasjourney.com. Let's explore this amazing world together! And don’t forget to download the books and see what the buzz is all about!
View all posts by Jaspa →
This entry was posted in Adventure, Environment, Photography, South America, Travel and tagged Cartagena, Colombia, dugout canoe, mangrove, Travel Theme: Fantastic, Weekly Photo Challenge: Motion. Bookmark the permalink.

2 Responses to Colombian Mangroves In A Dugout Canoe