I absolutely loved my two days in Lima, Peru, at the beginning of this month (posts to follow). Our tour guides Vanessa Vasquez and Marek Zakrzewski Fernández looked after us brilliantly. So much so, it was like spending a couple of days with old friends.

So I hope they won’t be offended when I say the traffic and driving in their home town is… well… unique.

I’ve been to all sorts of places with reputations for having bad traffic and/or drivers. Paris. London. Rome. Cairo. New York. To name just a handful. None of them phased me that much. Although I guess one person’s normality is another person’s nightmare.

Yet the congestion and attitude towards driving in Lima have to be experienced to be believed. Particularly away from the higher-rent districts such as Miraflores and Barranco. To be honest, I don’t know how Vanessa and Marek cope with it on a daily basis.

Heading (very slowly) into the historic heart of Lima

Vanessa told us that to survive you have to have a very macho attitude behind the wheel. Even if you’re a woman. From Marek we learned that in a city with 2 million cars, fully a quarter of them are taxis!

Taxis are common and cheap, but agree on a price before getting in

As you can probably imagine, it was difficult getting photos to convey just how bad the driving is in Lima. But here’s a quick tale of just one of the things I witnessed…

We were again stuck in stop-go traffic. During a brief spurt forward I saw (and heard) the wing mirrors of two cars smack together quite violently. A few yards later, the congestion brought both cars back to a halt beside each other. Now, in most places I’ve visited there would have been shouting and gestures exchanged between the drivers, at the very least. Yet the two guys in question just stared straight ahead, as if nothing out of the ordinary had happened! 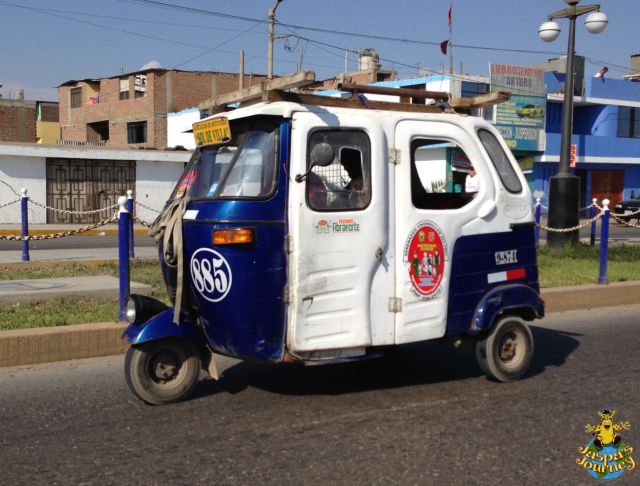 Three-wheeled ‘Motos’ are everywhere in Lima

This post was inspired by Cee’s Fun Foto Challenge, which this week is Cars.

Jaspa's Journey is a series of award-winning, travel-based adventure novels for strong middle grade readers by Rich Meyrick. Join the Adventure! Read the books! Follow Jaspa’s ongoing Journeys at www.jaspasjourney.com. Let's explore this amazing world together! And don’t forget to download the books and see what the buzz is all about!
View all posts by Jaspa →
This entry was posted in Adventure, South America, Travel and tagged bad drivers, Cee's Fun Foto Challenge: Cars, Lima, Peru, traffic. Bookmark the permalink.