The Temples of the Sun and the Moon, Trujillo, Peru

Near the modern city of Trujillo in Northern Peru, a pair of awe-inspiring pyramids rise from the dry coastal desert.

The Huacas del Sol y de la Luna (Temples of the Sun and the Moon) were constructed from millions handmade adobe bricks, by the Moche people between about 200 and 850 AD. Successive generations added new platforms on top of the existing structures, such that each one grew higher and higher.

These massive monuments, and the now-buried remains of the city that lies between them, formed the capital of the Moche culture for hundreds of years. 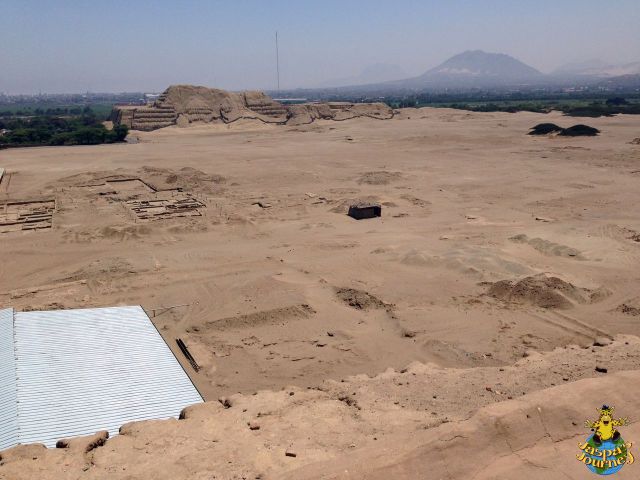 Huaca del Sol from Huaca de la Luna, with the partially excavated Moche city in between

The Huaca del Sol (Temple of the Sun), also known as the Capuxaida, is believed to be the largest adobe building in the Americas, comprising approximately 140 million mud bricks. Despite its name, it’s actually thought to have had a more political and administrative function.

Archaeologists estimate it was originally over 1130 feet long, 525 feet wide and 100 feet high. Sadly, a large proportion of the structure was destroyed by colonial treasure hunters in the 17th Century. That said, it remains a massive monument.

The Huaca de la Lune (Temple of the Moon) is in truth a complex of buildings, consisting of three main pyramidal platforms and four large plazas. 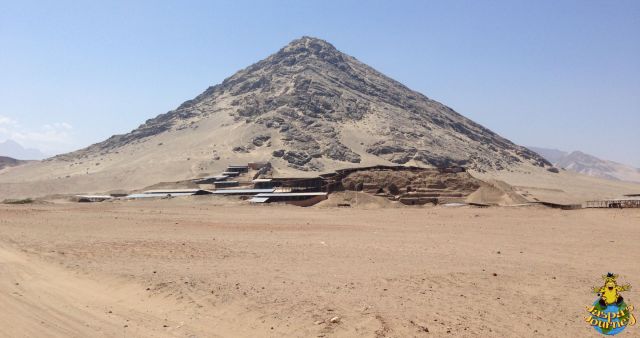 Huaca de la Luna, at the foot of Cerro Blanco 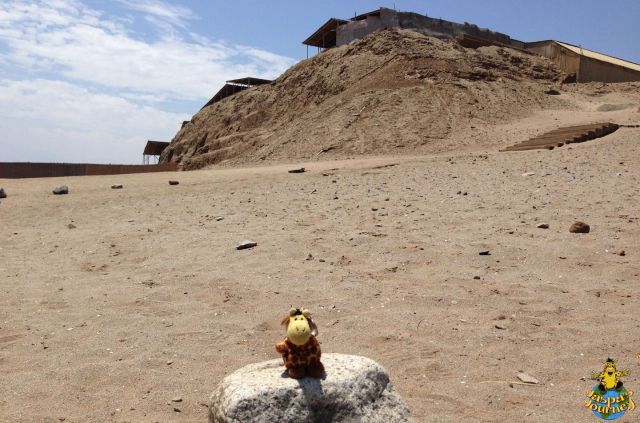 The Huaca de la Luna towers above the surrounding desert

Unlike its slightly larger neighbour, the Huaca de la Luna is most definitely a ceremonial and religious structure. It includes religious designs and has several altars, some of which were used for human sacrifice. 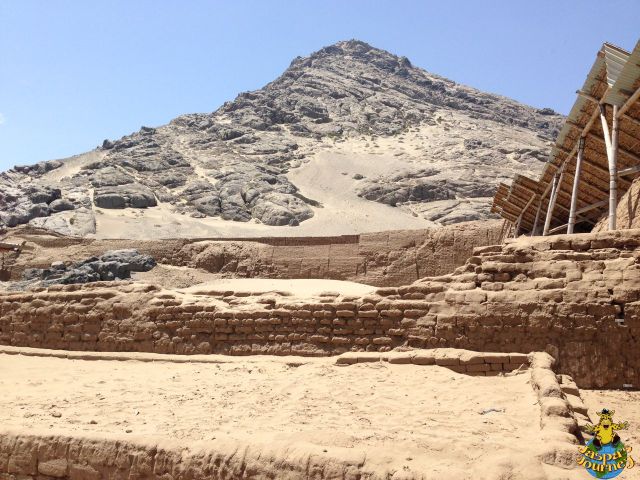 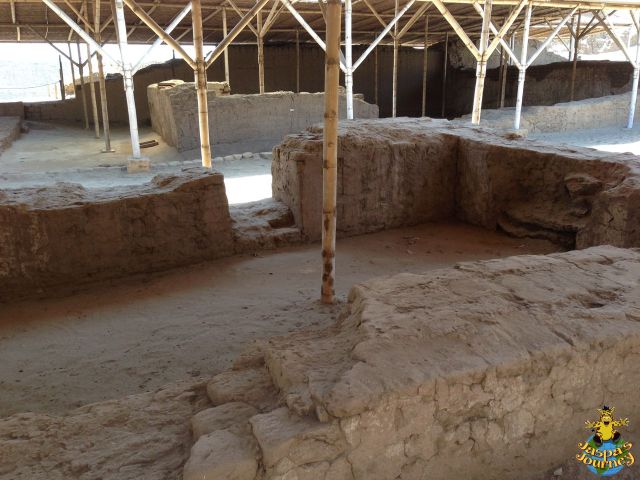 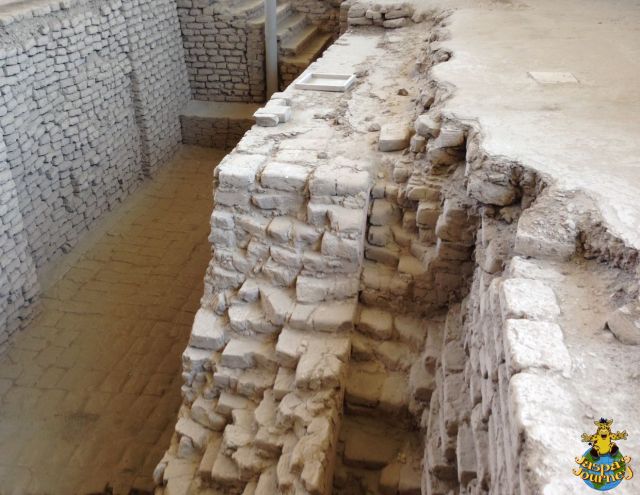 Many of the bricks used in construction of the temple have marks on them, possibly indicating their makers. 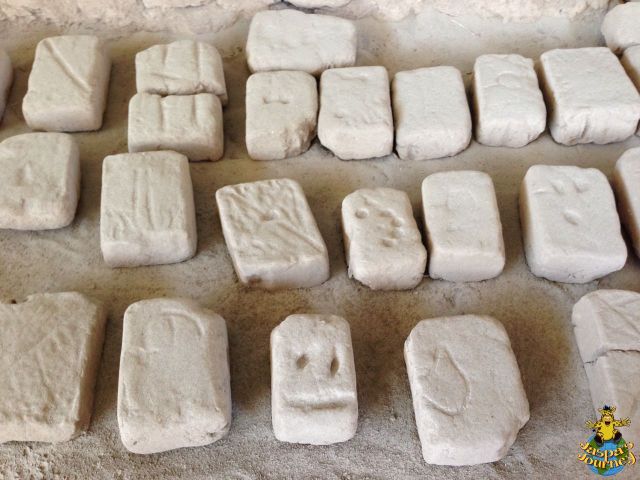 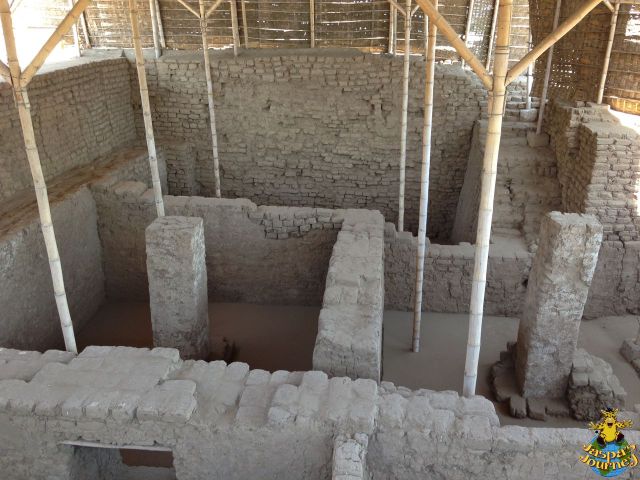 In many places the brick walls were coated with mud, upon which artists created relief designs. The designs were strictly controlled by the Moche priests. 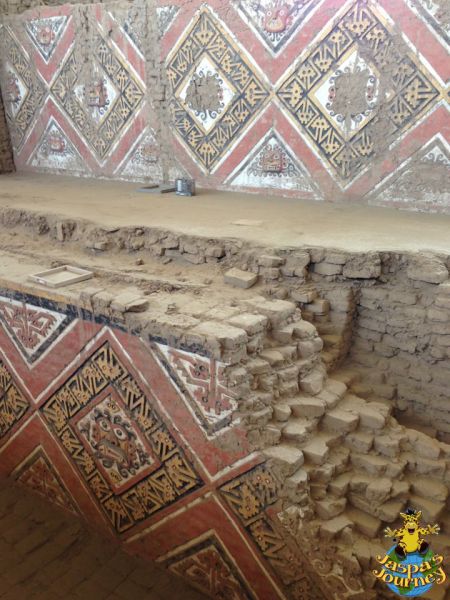 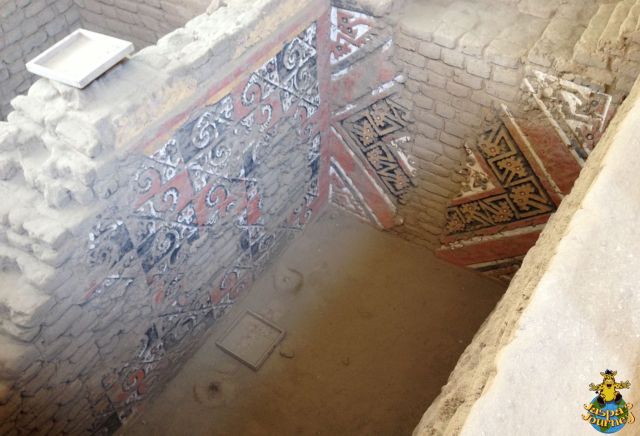 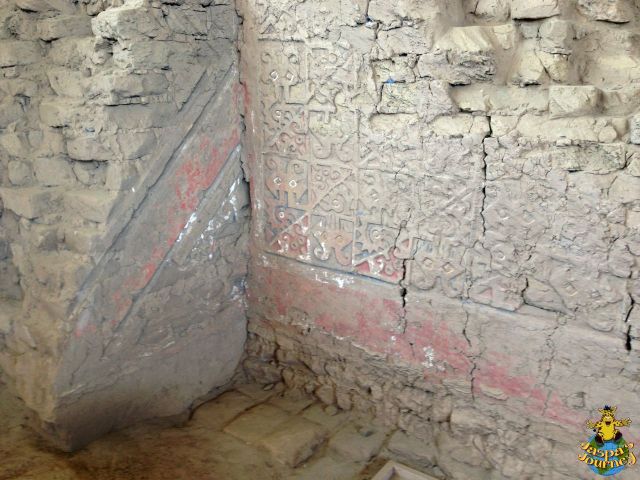 Clear evidence of one structure being superseded by another

One of the things that most surprised me most were the vivid colours with which these designs are painted. 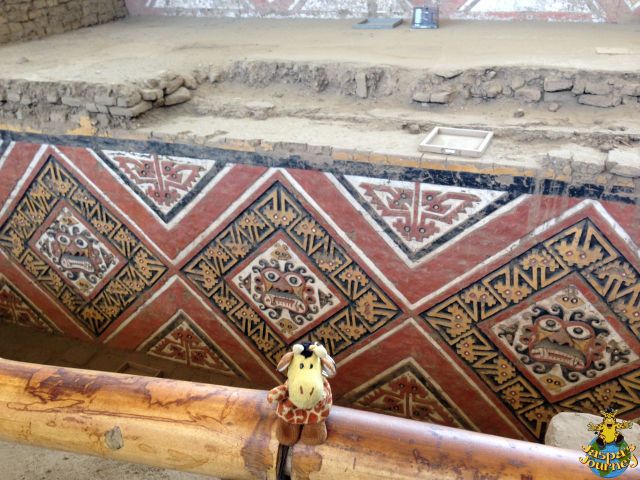 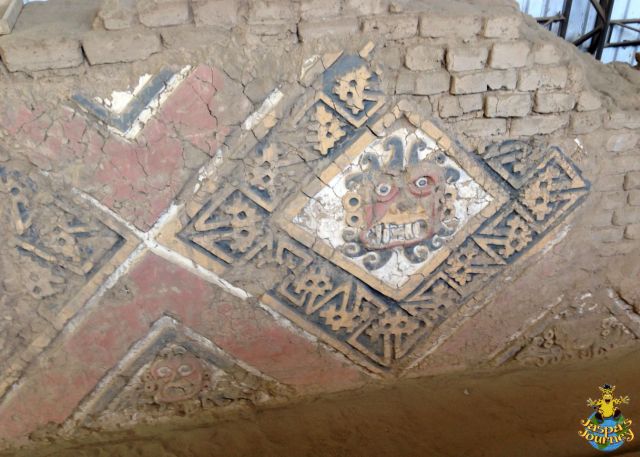 Aiapaec the Decapitator, the chief god of the Moche

All the colours used at Huaca de la Luna came from natural sources. The pigments are all water soluble, and would not have survived if the climate were not so dry. 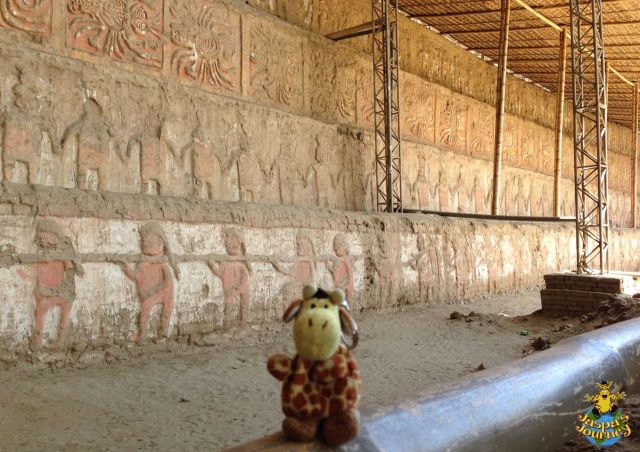 The North Façade is split into seven distinct layers of decoration… 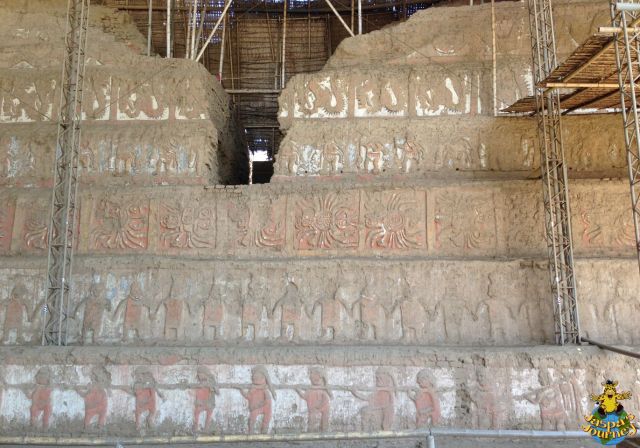 …From bottom to top: (1) Warriors leading Prisoners; (2) Presenters of Offerings; (3) the Spider Decapitator (ugh!); (4) the Sea Twin or Marine Deity; (5) Mythic Being carrying a severed head (again ugh!); (6) on the right is Aiapaec’s head with the legs of a bird and on the left a huge Serpent which extends from the Great Ramp; and finally (7) God of the Mountains aka the Beheader (there seems to be a lot of that going around!) 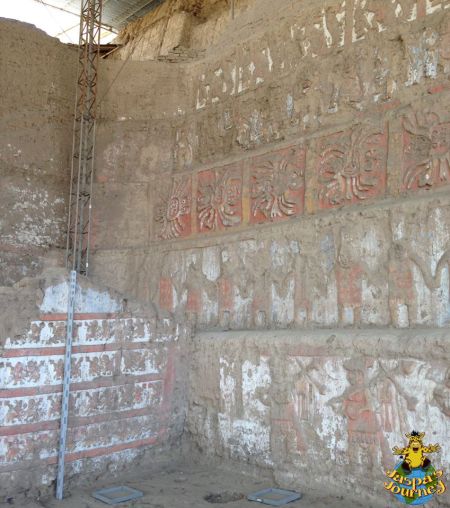 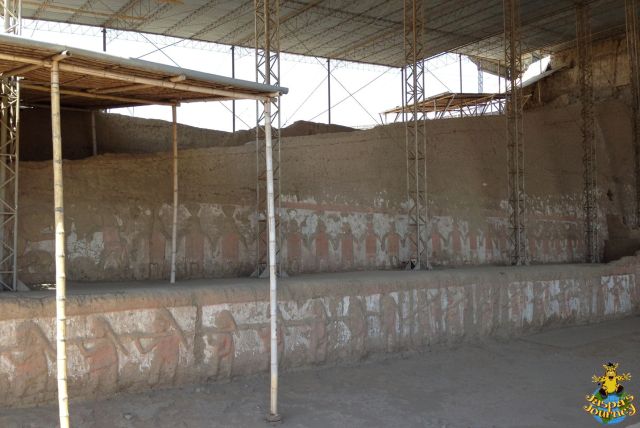 This post was inspired by the photo themes Handmade from Ailsa (Where’s My Backpack?), Vivid from Lignum Draco (Daily Post) and Dry from Jennifer (Jennifer Nichole Wells). 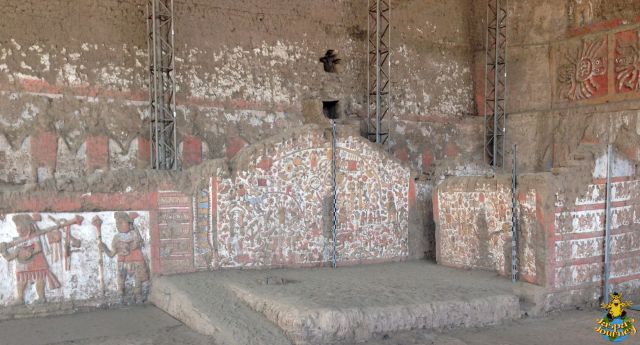 The most complex and best preserved Moche mural known to date is located near the northeast corner of the North Ceremonial Plaza, where the Great Ramp joins the North Façade

Thanks to Lina of TrujilloDelPeru.Com for guiding us through the marvels of the Temples of the Sun and the Moon.

Star of my own award-winning adventure novels, Jaspa's Journey. Geocaching addict & F1 fan. Adventure Journeyer & blogger extraordinaire. Check out my website: www.jaspasjourney.com And don’t forget to download the books and see what the buzz is all about!
View all posts by Jaspa →
This entry was posted in Environment, History, South America, Travel and tagged Huaca de la Luna, Huaca del Sol, Moche, One Word Photo Challenge: dry, Peru, Temples of the Sun and the Moon, Travel Theme: Handmade, Trujillo, Weekly Photo Challenge: Vivid. Bookmark the permalink.

9 Responses to The Temples of the Sun and the Moon, Trujillo, Peru