The Day I Met Justin Wilson

Today is a sad, sad day. In fact, it breaks my heart to write this post. Because today one of my heroes, the racing driver Justin Wilson, was laid to rest. He was just 37 years old.

In 2003, Rich had already been a fan of Formula 1 for years, but Sue and I were just getting started. As it happened, our introduction to the sport coincided with the arrival of a talented young British driver called Justin Wilson.

Justin began that year with the Minardi team, the minnows of the Formula 1 pond, before being promoted to Jaguar towards the end of the season.

Perhaps because we shared our ‘Rookie Season’ in F1, Justin Wilson left a lasting impression on me. And even though 2003 would prove to be his only year in Formula 1, I remained interested in his career when he moved on to new challenges in North America.

So you can imagine how excited I was to stand beside Justin’s car on the grid of the Indy 500 this year.

And even that was topped by actually meeting Justin outside his garage that very weekend!

I count myself extremely lucky to have met Justin Wilson

I still find it hard to believe that less than three months later, he was fatally injured in a million-to-one accident at Pocono Raceway, Pennsylvania. The timing couldn’t have been more cruel, as it looked certain he would finally get a fulltime seat with a top-tier IndyCar race team next year at Andretti Autosport. 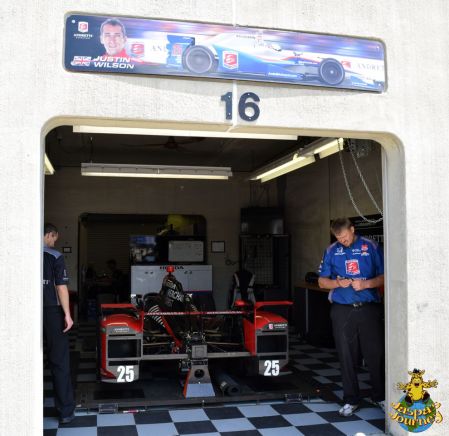 Justin’s car and garage at Indy this year 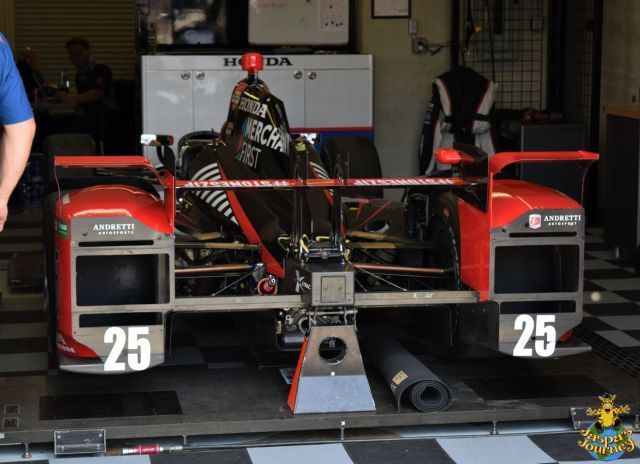 One thing that struck you on meeting Justin Wilson, was what an incredibly approachable person he was. No surprise then, that he was extremely well respected in the motor racing community, not just for his driving talent, but also for his friendliness, optimism and integrity.

For this reason he was given the ironic nickname, Bad Ass Wilson.

And for obvious reasons, I love the fact that his 6’4’’ frame also lead to him being known as the Flying Giraffe (he remains the tallest ever F1 driver).

But I had my own nickname for this talented, gentle giant.

Star of my own award-winning adventure novels, Jaspa's Journey. Geocaching addict & F1 fan. Adventure Journeyer & blogger extraordinaire. Check out my website: www.jaspasjourney.com And don’t forget to download the books and see what the buzz is all about!
View all posts by Jaspa →
This entry was posted in Formula 1, Jaspa's Journey and tagged Andretti Autosport, Bad Ass Wilson, Indy 500, IndyCar, Justin Wilson, RIPJustinWilson. Bookmark the permalink.

3 Responses to The Day I Met Justin Wilson