St. Petersburg’s Hermitage is today one of the most famous art museums is the World. In terms of renown, it’s arguably second only to the Louvre in Paris. 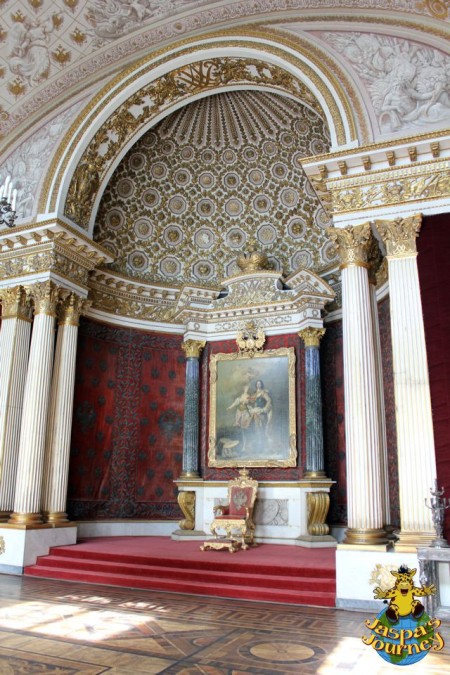 Just to prove I was there!

I was a bit jaded by this vase

The core of the art collections – including over 2,500 paintings, 10,000 drawings and 10,000 carved gems – were assembled by Empress Catherine the Great between 1764 and 1774. Today, the Hermitage is estimated to contain over three millions items, many of them priceless.

Unfortunately, I can’t remember who this painting is of/by, but I remember liking it at the time. Can anyone help me out?
Nice frame, in any case! 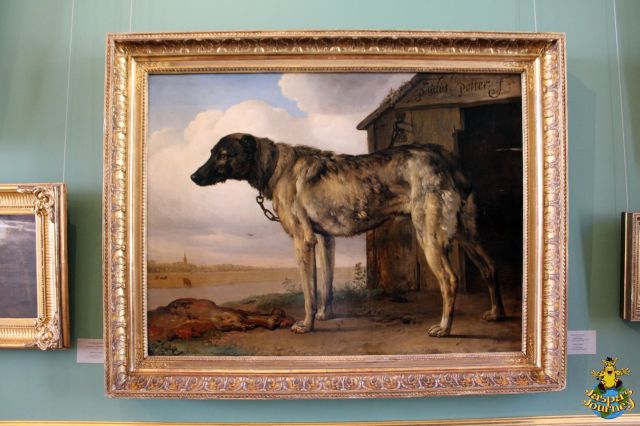 This one I do remember – it’s a wolf hound painted by Paulus Potter, and one of my favourite paintings I saw in the Hermitage 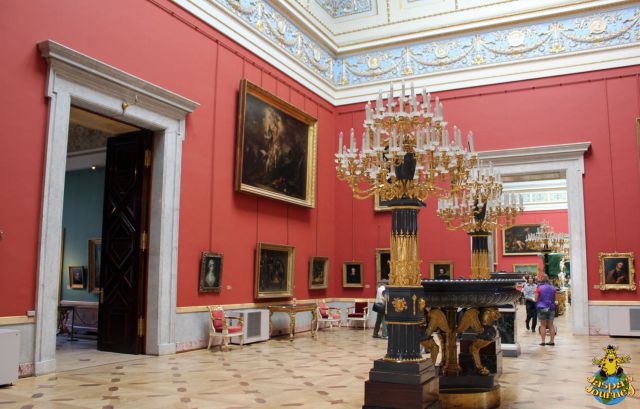 Gallery in the New Hermitage 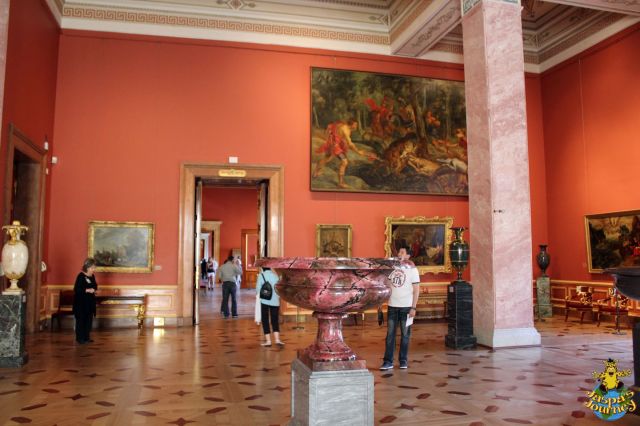 Another gallery in the New Hermitage 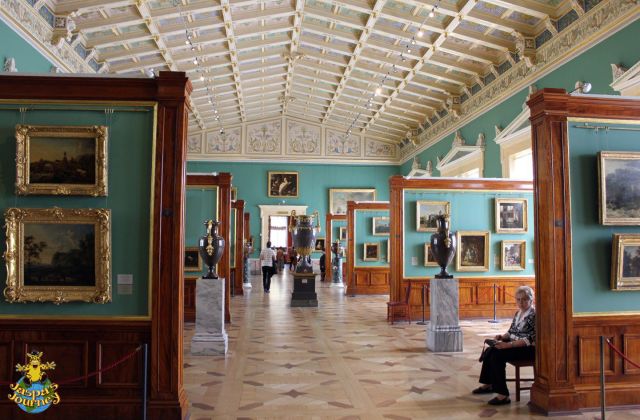 Getting a hard stare from one of the Custodians!

However, I have to admit to not being much of an art enthusiast. For me, the big draw of the Hermitage are the buildings that hold the collections, which are architectural and painted works of art in their own right, both outside and in.

The Hermitage, seen from the Peter and Paul Fortress across the River Neva

The oldest part of the five-building complex is the magnificent Winter Palace, which was home to Russian Emperors and Empresses from 1763 right up to the Revolution in 1917, although rarely lived in after 1881. 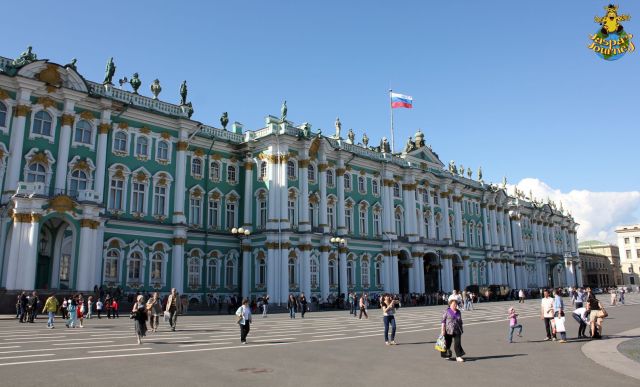 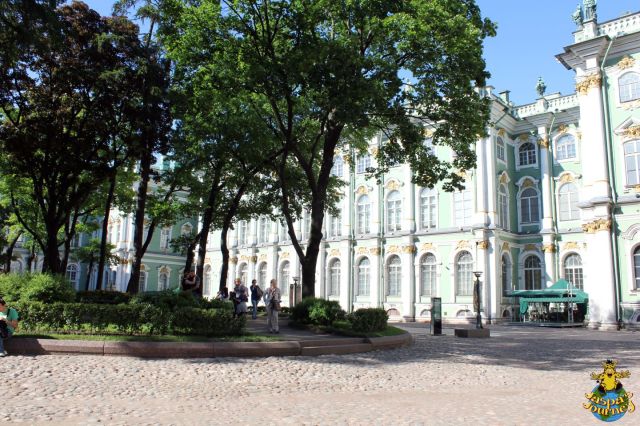 The courtyard of the Winter Palace 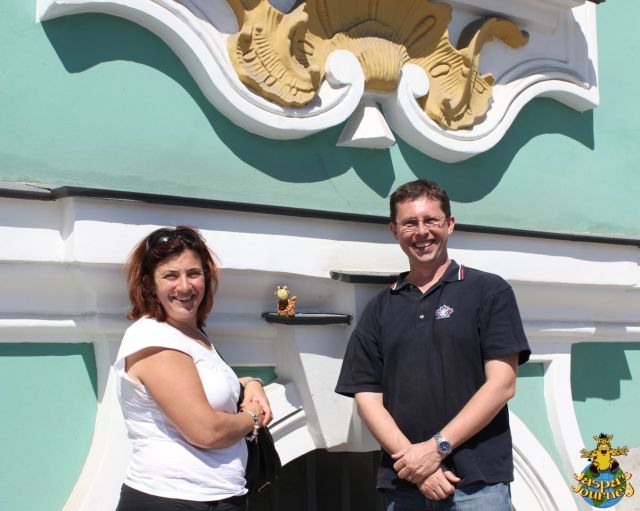 Perhaps the Hermitage’s most recent treasure is a geocache (which we found!) hidden on the outside of the Winter Palace

The exterior of the Winter Palace has remained largely unchanged since its construction. Sadly, the same cannot be said for its interior. Fashion and fire resulted in many of its rooms being redesigned and renovated over the years. And although they still look wonderful today, part of me wishes I could have seen them as they originally appeared during Catherine the Great’s time.

The Winter Palace’s Main Staircase, one of the few aspects of its intorior that has remained largely unchanged since it’s construction 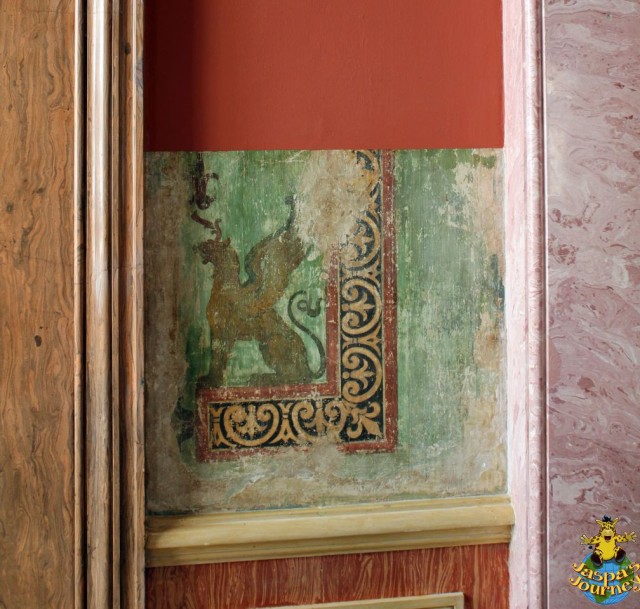 A small section of an original wall decoration, preserved in the Winter Palace

Palace Square from a window frame inside the Hermitage 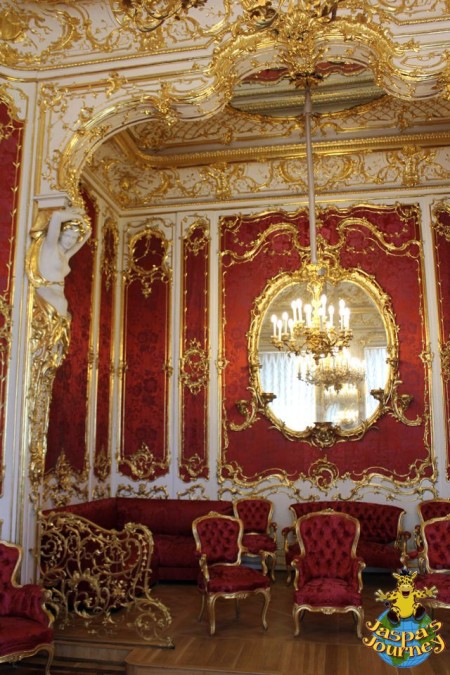 Catherine herself built the Small Hermitage, and later the Large Hermitage, to hold her expanding art collection, not to mention the opulent Theatre. These were followed by the New Hermitage under the reign of Catherine’s grandson, Nicolas I, who first opened the doors of the Large and New Hermitages to the public in 1852.

Hanging Gardens on the roof of the Small Hermitage, outside the Pavilion Hall

Golden Drawing Room – wonder where it got its name from…

Together, the buildings of the Hermitage present a majestic façade along the banks of the River Neva. And whether you’re a fan of architecture or artworks, the Hermitage is sure to put something you’ll enjoy into the frame.

The Hermitage stretching along the embankment of the River Neva
From left to right: the Theatre, the Large Hermitage, the Small Hermitage and the Winter Palace

Like the Church on Spilled Blood, which I featured in my blog post on Friday, the Hermitage is one of countless treasures that combine to form the Historic Centre of Saint Petersburg and Related Groups of Monuments UNESCO World Heritage Site.

Thanks to Yana Kazakova our marvelous guide arranged through Guide Guru, for showing us around the Hermitage, not to mention the rest of St. Petersburg.

This post was inspired by Cee’s Fun Foto Challenge, which this week is Anything Painted, and the photo challenge of Ornate from Ben of The Daily Post.

Leave a Reply to I. Greenwald Cancel reply