OK, so technically it was just one Transformer (which couldn’t actually transform). 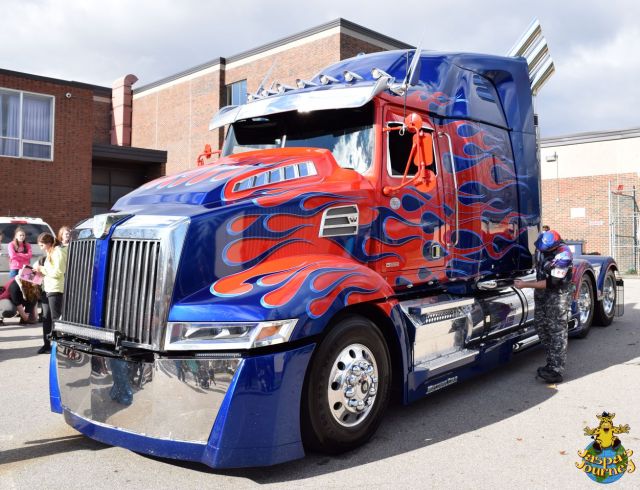 And it was really more of a Visit than an Invasion.

And the Paris in question is a small town in Southern Ontario, not the capital of France.

Other than that, the title of this blog is absolutely accurate.

Those of you familiar with Transformers movies will know that the leader of the good guys is a hulking heavyweight robot called Optimus Prime. Now things like that tend to stand out, so when he’s trying to be inconspicuous, Optimus transforms himself in to a sleek and shiny (but still pretty heavyweight) truck. 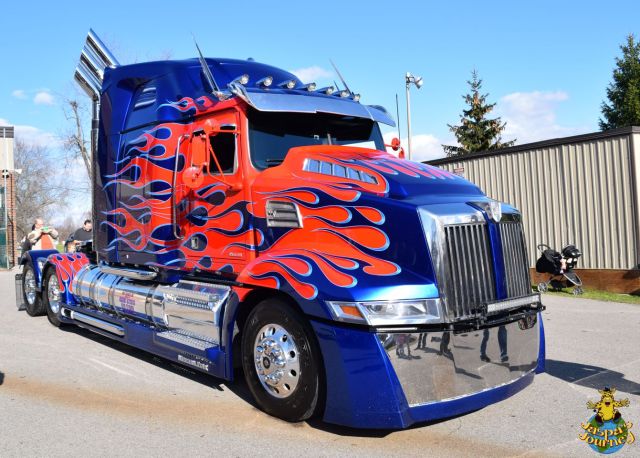 Back in November last year, the actual Optimus Prime truck used in the last installment of the Transformers movies, Transformers: Age of Extinction, drove all the way from Alabama to Ontario. Its various stops in Brant County allowed fans of the films (like me!) to meet a real life movie star!

Yet there was a serious reason behind the visit. The truck was in Brant to pay tribute to 7-year-old Evan Leversage, who was battling with terminal brain cancer at the time. Unfortunately, Evan was too ill to see Optimus in person, but his brothers enjoyed the juggernaut on his behalf, and Evan’s schoolmates made a video for him in front of the truck.

Sadly, Evan died less than a month later, but not before his entire village celebrated Christmas early for him. And although I never met Evan, I know I’ll always remember him whenever I watch a Transformers movie, and see Optimus Prime’s truck. 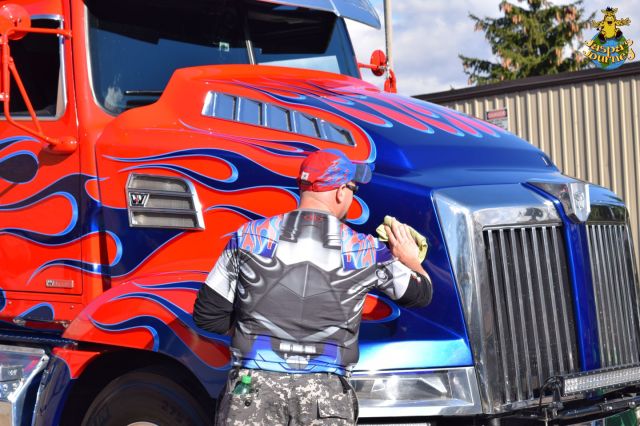 Looking this shiny takes a lot of elbow grease from driver, Chad Mills

This post was inspired by this week’s photo challenges of Weight(less) from Ben of The Daily Post and Robotic from Paula of Lost in Translation.

Even the wheel hubs have Transformers logos!

Jaspa's Journey is a series of award-winning, travel-based adventure novels for strong middle grade readers by Rich Meyrick. Join the Adventure! Read the books! Follow Jaspa’s ongoing Journeys at www.jaspasjourney.com. Let's explore this amazing world together! And don’t forget to download the books and see what the buzz is all about!
View all posts by Jaspa →
This entry was posted in Adventure, Canada, Jaspa's Journey, Travel and tagged Optimus Prime, Paris, Thursday's Special: Robotic, Transformers, Transformers: Age of Extinction, Weekly Photo Challenge: Weight(less). Bookmark the permalink.