In about half an hour’s time, the lights will go out to signify the start of the 2014 Formula 1 Belgian Grand Prix at Spa-Francorchamps. The start of an F1 race is always a happy-sad time for me. Happy because I love Formula 1. Sad because I always wish I was sitting trackside watching the action live.

Which is exactly what I was doing four weeks ago at the last Formula 1 race, the 2014 Hungarian Grand Prix, at the Hungaroring outside Budapest.

Now, for those that don’t know, there’s a lot more to a Formula 1 weekend than just the race on the Sunday afternoon. There are practice sessions, qualifying, support races, pit walks… but I’m getting ahead of myself.

The first thing we did when we got to Budapest was spend a couple of days exploring the city itself. I wrote a brief post while we were there, and there’s definitely more on the way about our visit to this beautiful city. In the meantime, feel free to check out Rich and Sue’s Vienna to Budapest album on Flickr.

Although the cars didn’t roll out until Friday morning, our first foray to the track was actually on Thursday evening, when everyone with a valid ticket was invited to attend the Pit Lane Walk. This was our one chance to see the cars really close up, so of course we jumped at it. 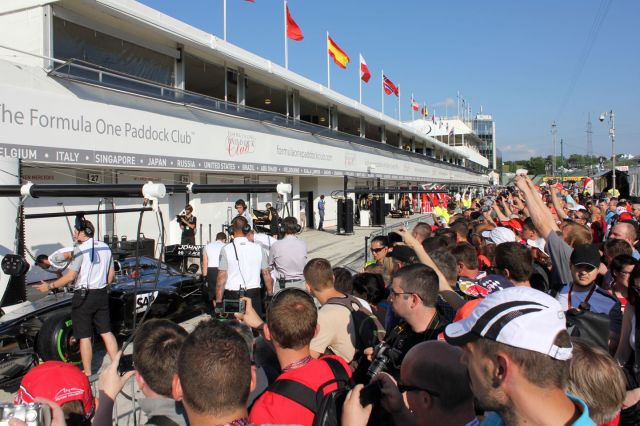 The crowds were mental, in an enthusiastic and friendly kind of way. We bypassed the all-too-brief driver autograph sessions, and instead took our time wandering down the Pit Lane, gawping into the garages at the super-hi-tech cars inside.

During a similar event at the 2006 Canadian Grand Prix in Montreal, Rich and Sue got their photo taken beside David Coulthard’s car in the Red Bull garage.

No such luck this time, but we did get to see McLaren practicing their pit stops up close and personal, which was almost as cool.

Video of the McLaren F1 Team practicing their pit stops:

We were at the track bright and early on Friday, to get our first glimpses of Formula 1, 2014-style. There’s been a lot of talk about this year’s engines being too quiet. And although the current cars are undeniably quieter than their forerunners, we soon discovered it just meant you could hear other noises that used to be drowned out. Like the squeal of brakes being tortured. Very exciting!

Saturday saw some great action throughout the day, including a thrilling GP2 race. But the main event was the F1 Qualifying session. There were dramas of all kinds, from Lewis Hamilton’s (one of the Championship contenders) Mercedes bursting into flame, to a brief rain shower just before the third part of Qualifying, which resulted in a big crash right in front of us. Fortunately, no one was hurt, and we went home full of expectation for the following day’s climax to the weekend. 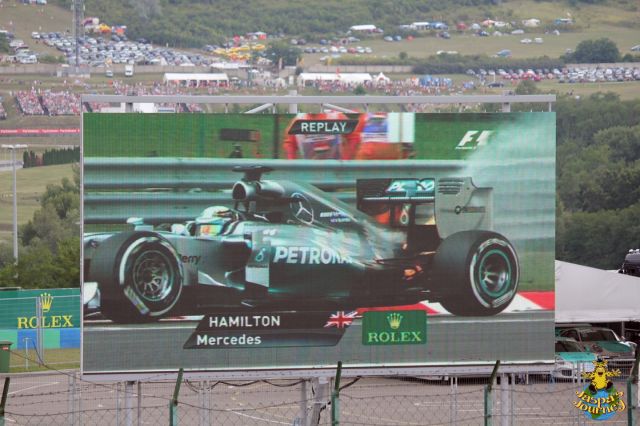 Video of the incident at the start of Q3:

Sunday morning was characterised by warning flashes of lightning and grumbles of thunder. Then, with less than an hour to go before the big race, a torrential downpour soaked the Hungaroring (luckily, we were under cover). The short but intense shower meant the race started under damp, slippery conditions.

Video of the run down to the first corner:

Rain continued to threaten throughout the afternoon, but in the end never returned. Yet the stage had already been set for one of the most exciting races of the season, won by amiable Aussie, Daniel Ricciardo. 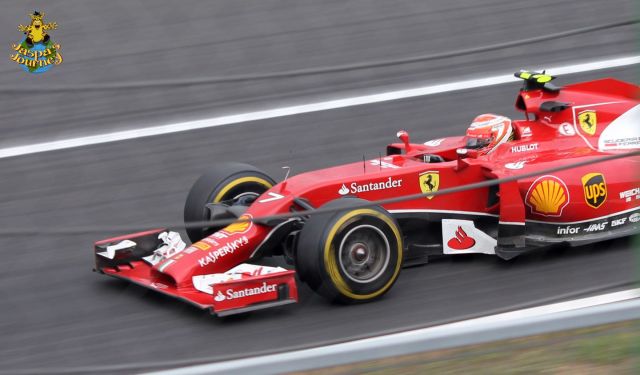 The 2014 Formula 1 Hungarian Grand Prix certainly kept us discussing it animatedly all the way to, Zagreb, that evening. And ever since, to be honest. 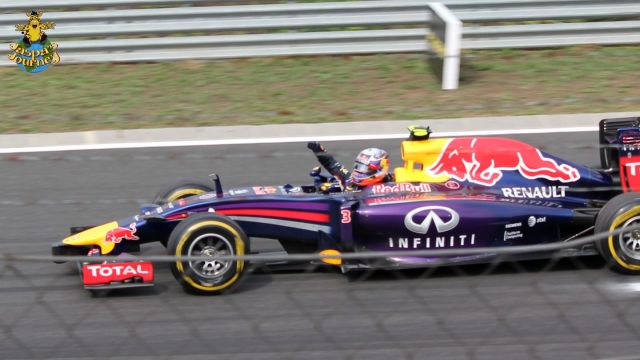 If you’d like to see more photos from our weekend at the Hungaroring, visit Rich and Sue’s Hungarian Formula 1 Grand Prix Flickr album.

Jaspa's Journey is a series of award-winning, travel-based adventure novels for strong middle grade readers by Rich Meyrick. Join the Adventure! Read the books! Follow Jaspa’s ongoing Journeys at www.jaspasjourney.com. Let's explore this amazing world together! And don’t forget to download the books and see what the buzz is all about!
View all posts by Jaspa →
This entry was posted in Europe, Formula 1, Jaspa's Journey, Photography, Travel and tagged Budapest, F1, Hungarian Grand Prix, Hungaroring, motorsport, race. Bookmark the permalink.