The Indy 500 is one of the most famous car races in the world, right up there with the Formula 1 Monaco Grand Prix and the 24 Hours of Le Mans. For a long time now, I’ve wanted to see all three of these classics. This past weekend, I crossed the first of them off my Bucket List, when I attended the 99th Indy 500 at Indianapolis.

In addition to an absolutely nail-biting race, I got a whole lot more than I bargained for…

But let’s start at the beginning.

On Friday, Carb Day, we attended the final practice session before the big race. My perspective for the action looked something like this:

Even with binoculars, this was the best view I could get of the pit complex: 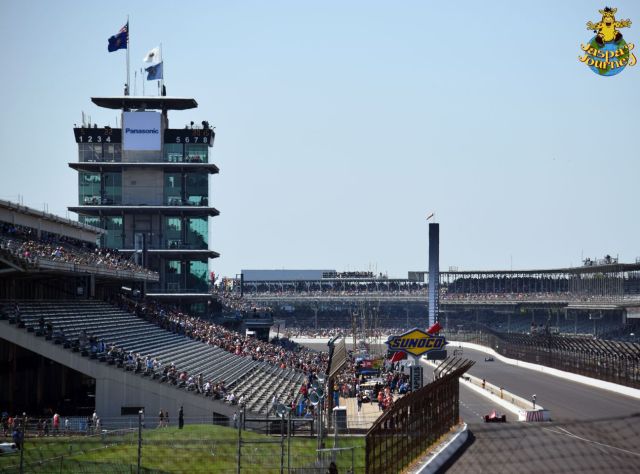 But following the Indy Lights Freedom 100 race, I got a whole lot closer to the action.

We started in the garages, where we got some close-up views of the cars, and even met a couple of the drivers (more on that in the next week or so).

The garages at the Indianapolis Motor Speedway

Bisckits and me checking out some Indy 500 boots

Then it was out onto the famous Gasoline Alley, for a walk around the pits. We even got to see the final of the Pit Stop Challenge from the track itself.

Under the grandstand and into Gasoline Alley

My first proper view of the IMS pits

And as tradition demands, I got to kiss Indy’s famous Yard of Bricks.

Patrick, Bisckits and me on the Yard of Bricks (on the actual track)

Kissing the Yard of Bricks

But things were just heating up.

Have you ever watched a big race on TV and enviously wondered who all those people are wandering around the grid as the cars form up for the start? Well, on Sunday one of those people was me!

I still can’t quite believe it!! 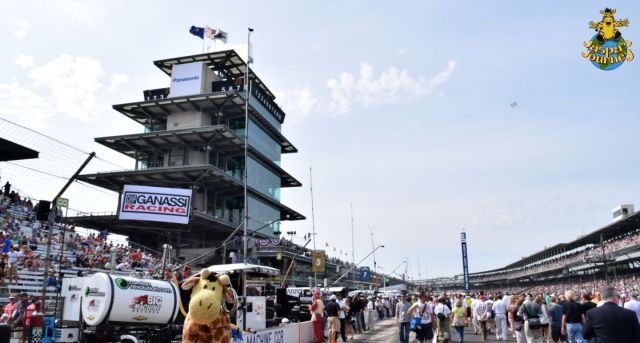 Back in the pits, this time on race day

The cars starting to arrive on the grid 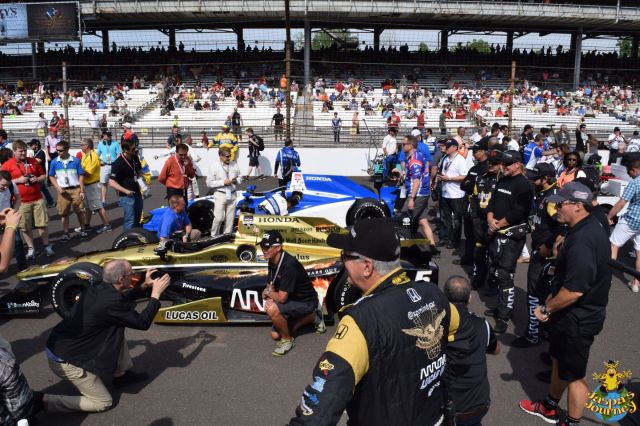 Can I get over there with this pass?

Unbelievably, the answer is Yes! 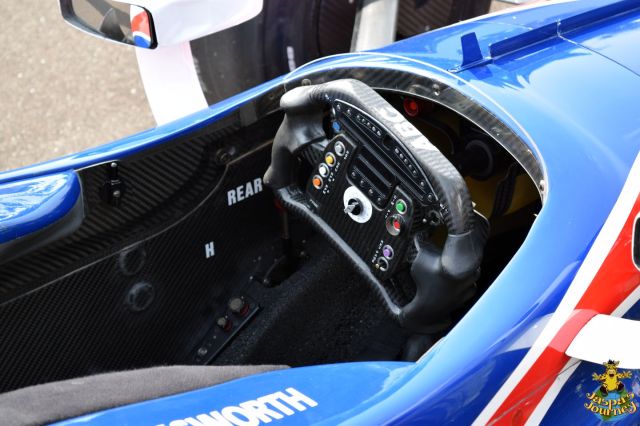 Coming through! Gabby Chaves’s crew push his car towards its starting slot 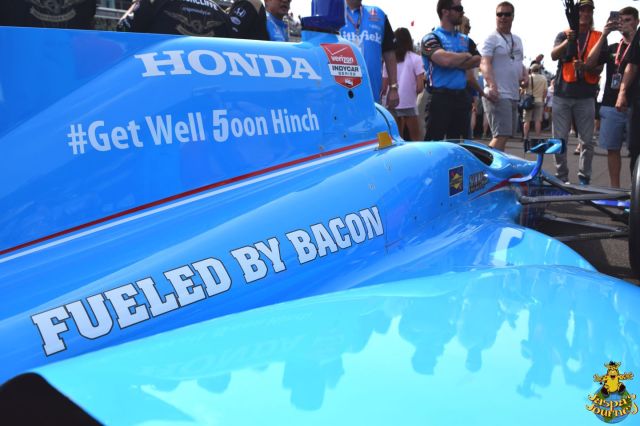 I’m not sure about Connor Daly’s propellant – but it’s a great idea!

Apparently, Patrick Dempsey and his friends were thrilled to share the grid with me 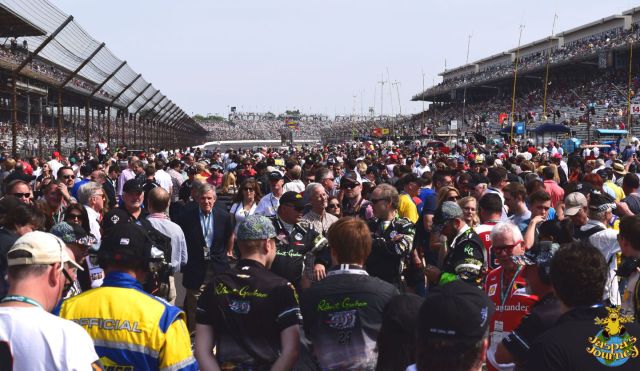 In under an hour, I’ll be watching the race from the stands in the distance

This was everyone’s view of Ryan Hunter-Reay’s car last year – he won the race! 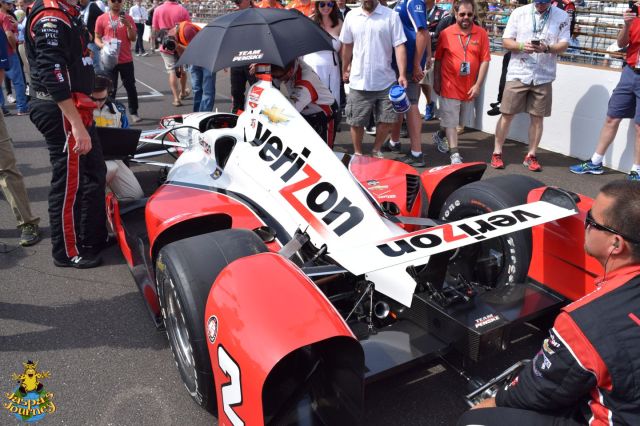 Me and Rich in 7th Heaven!

I’d like to take this opportunity to once again thank our friends Jeff and Ray for giving Sue, Rich and I a unique perspective on this amazing spectacle. We’ll all be grinning about it for many years to come! 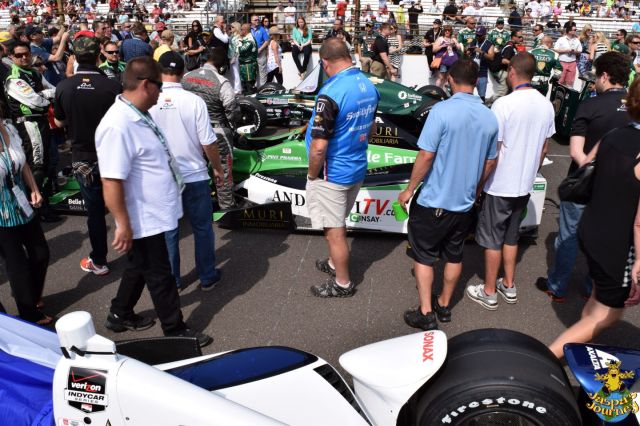 Marco Andretti’s crew grab a sandwich while they still can 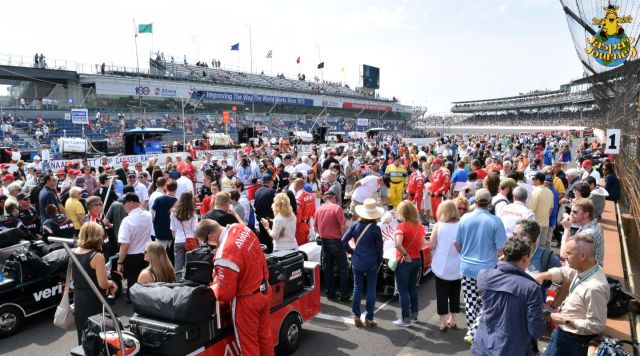 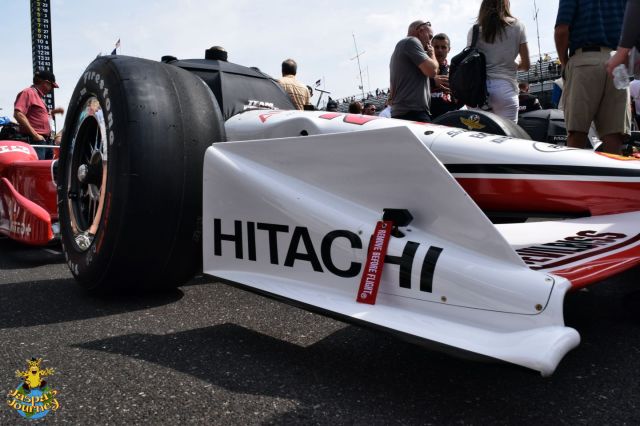 I love this tag on Simon Pagenaud’s front wing

Come back later in the week to learn who I bumped into down at the IMS. I’ll even give you a blow-by-blow re run of the race in pictures!

And Mario Andretti’s ride for the afternoon

An unusual view of Turn 1

This post was inspired by Cee’s Which Way and Fun Foto Challenges this week, the latter of which is Perspective (unusual angle or point of view), and also by Nancy’s From a New Angle and Jo’s Monday walk. 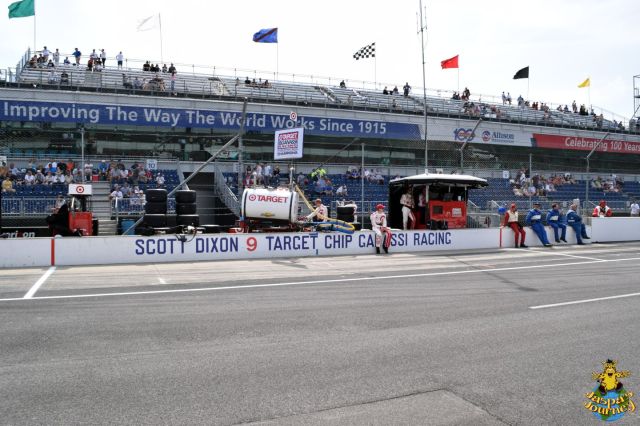 The lull before the storm on Pit Row

Tools of the pit crew’s trade

I could work this, for sure!

Star of my own award-winning adventure novels, Jaspa's Journey. Geocaching addict & F1 fan. Adventure Journeyer & blogger extraordinaire. Check out my website: www.jaspasjourney.com And don’t forget to download the books and see what the buzz is all about!
View all posts by Jaspa →
This entry was posted in Adventure, Formula 1, Photography, Travel, USA and tagged A Photo a Week Challenge: From A New Angle, Cee's Fun Foto Challenge: Perspective, Cee's Which Way Photo Challenge, Indianapolis Motor Speedway, Indy 500, Jo’s Monday walk. Bookmark the permalink.